Before I get into this review, I need to issue a disclaimer.

I turned 35 on June 1, which means that I’m not so old that I couldn’t appreciate the show at all, but I am old enough that I had to ask my son a few times who certain people were, just like my mother used to do to me any time an awards show came on. I’m removed, but not really, but sort of, if you know what I mean. The views and opinions in this review come from a person who is old enough to remember dope music but still not so old that I can’t appreciate the GOOD (emphasis on good) new music that’s coming out now.

Now that that’s out the way, here we go: 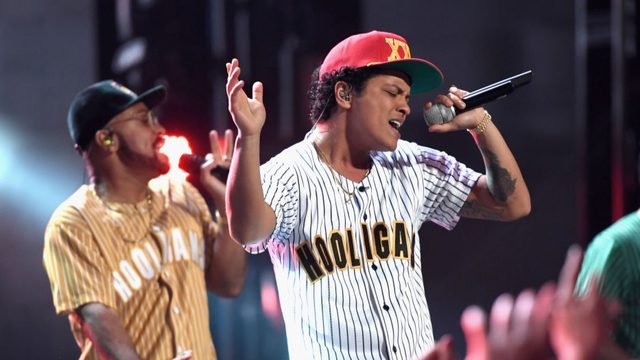 Bruno Mars was amazing. Seven performers, simple costumes, no elaborate set, lighting, or half-naked background dancers. Just a completely awesome and very engaging performance. Bruno looks like he has so much fun on that stage. He’s able to draw in even the most reluctant crowd ever– an audience full of black folks all trying to outslay one another in complicated outfits, laid edges, and industrial strength waist trainers.

Leslie Jones. Honey. Understand me. We already have one incredibly loud, very unfunny comedian in the spotlight. There isn’t room for another. Your being loud does not equal your being funny. And nobody wants to know about the dragon that lives inside your panties. Never mention it again, please. Thanks.

Nobody performed live, it seemed. The BET Awards was more of a trap karaoke fashion show.

I am a Migos fan, and I’m not ashamed to admit it. During their performance, I noticed two very important things: 1. I didn’t necessarily understand it, but my son did, and he loved it. Their performance wasn’t for me… it was for my kid’s generation, and that’s cool. They need their shine, too. 2. Offset’s sequin blouse killed me. He looked like a grandmother on her way to her church’s 50th anniversary banquet. All he was missing was nude stockings and swollen ankles.

Solange got a much-deserved award for Cranes in the Sky. Kudos to her.

Trey Songz took the award, in my opinion, for the worst performance of the night. His singing missed the mark, and he seemed to be overcompensating with his obnoxiously sexual backup dancers. His performance was boring, at best, and provided me with an opportunity for a much needed snack break. Chris Brown, however, was pretty good. And no, I’m not interested in your soapbox rant about his domestic violence. Appreciate the performance for what it was. Let people enjoy things.

Xcape had their much anticipated reunion on the BET stage, their first time performing together in years. This is my honest analysis: Tiny was much better than I expected her to be. I respect the hell out of Kandi as a business woman, a song writer, and a person in general, but she kinda sounds like a distressed farm animal when she sings. Overall, though, the performance was good, one of the highlights of the evening for me. I definitely want to support them when they go on tour. I want friendships as strong as their waist trainers, though. Lawd.

Bishop Nayvadius DeMun Wilburn has given me so many useful nuggets to live by over the years and I am definitely a fan, but his performance last night was subpar. He’s a boring performer. I think I took a bathroom break while he was on stage.

Tamar and that platinum blonde lacefront had me in stitches, especially at the end when she belted R. Kelly-esque “ohh ohh ohh”s. She lip-synced the hell outta that song and dropped the mic like she killed the game. I couldn’t stop laughing enough to acknowledge whether or not her performance was actually good. I’m petty like that. I really like Chance the Rapper and was glad he received the recognition he did last night. I was annoyed, however, that he won best NEW artist, as he’s not new at all. Chance has been doing his thing for a minute. Remember “Baby Blue” on Action Bronson’s Mr. Wonderful album? (Do y’all know who Action Bronson is??) I think that award should’ve gone to Cardi B, but kudos to Chance for making tolerable music and donating time, money, and other resources to improve his community.

Speaking of Cardi B… Regardless of what you think of her, you have to respect a woman who takes a small opening and creates an entire lane for herself. She started off as a stripper, but her antics landed her on Love and Hip Hop, which led to a multi-million dollar record deal and many endorsements. Cardi done fixed her teeth, hired a stylist, and is out here shining, all while still being true to the person she was before the fame. I’m not mad at her AT ALL.

It was at this point that I began to wonder if this show would ever end. It felt like I’d been sitting there for forty days and forty nights and it still wasn’t over.

I was half-sleep and almost completely uninterested by the time the Lifetime Achievement Award was given, but the New Edition Fellowship Community Mass Choir woke me up. I really enjoyed entire segment, so much that I wasn’t even that mad at the dead air that occurred while New Edition changed their clothes to prepare for their performance. (Why wasn’t that better orchestrated?) NE still got it. I was impressed with them, especially with the poor white cat Bobby found to compliment his all white performance ensemble. (I just wanna spend 20 minutes dissecting the complicated mind of Bobby Brown. He been through some shit, y’all. He told us this last night during his acceptance speech, after the censors had obviously fallen asleep and/or stopped caring about their jobs.)

I had no idea who SZA was before last night. All I knew of her was that she obviously makes music for single women who still have sex with their exes on a pretty frequent basis. I was completely underwhelmed by her music and her performance last night. Twitter lied to me when they told me she was dope. I demand a refund.

People were really mad that Beyonce didn’t attend the show to accept her award. Y’all don’t go to work when you don’t feel like it, right? She just had two babies. Let her be on maternity leave in peace, beloved.

Finally, DJ Khaled n’nem closed the night with their performance of “I’m The One” (minus Justin Bieber). In a move that was anything but surprising, Khaled brought his son Asahd onstage, who has achieved more success in his 8 months of life than I have at 35 and I feel some type of way about it. I mean, he came to the show in a tuxedo that matched Gucci Mane. Life goals, okay? Anyway… Chance and Quavo did well, but Lil Wayne concerns me. He’s like the cousin that shows up really high at every single family function. I’m not sure how much of his career now is built on what he used to be, but he was there, nonetheless.

The awards show was approximately 749 hours long, it seemed, but I enjoyed it overall. Black people are amazing and dynamic and talented and despite the production issues, the show was a great display of all our magic in all its splendor. It was also an opportunity for us to come together on Twitter and enjoy the show together, which is always a great time. The show also re-confirmed that I am, indeed, both washed and old.