Was it because of the FBI probe that sent shockwaves through the sports world in February?

The lack of a truly dominate team/dynamic player or both?

Well none of that matters at this point because the tournament is here and you will get excited for players and teams you have never heard of.

This year – as stated earlier – in a season where there hasn’t been the sexy, dominant team to bloviate over throughout the season, there have been a couple of great stories from teams you wouldn’t have imagined from six months ago.

Early success from teams like Oklahoma, Purdue and Arizona State kind of overshadowed eventual great seasons from Xavier, Virginia and Villanova. Beyond that, this tournament is chock full of teams that could make legitimate damage in this year’s tournament.

Here is a quick breakdown of each region.

The Villanova Wildcats are the #1 seed and are my selection to make it through this difficult region.  My favorite player in college basketball this season has been Villanova point guard Jalen Brunson. His outstanding season has recently been stamped with plenty of post season awards including Big East Player of the Year, All-Big East First Team, one of five finalists for the Bob Cousy Point Guard of the Year Award along with Big East Championship All-Tournament Team honors after averaging 23 points and 3.6 assists in guiding ‘Nova to the tourney title. His play – along with forward Mikal Bridges – should swing these eventual close games in their favor.  This team is tournament tested and I really dont trust second-seeded Purdue or third-seeded Texas Tech to challenge the Wildcats. If there was a team that I could see that could upset ‘Nova, it would be fourth-seeded Wichita State, another tournament tested team.

The most dynamic player of the region – the player we all should focus on – is Collin Sexton of ninth-seeded Alabama.  The soon-to-be lottery pick point guard had a helluva SEC Tournament making the all-tournament team basically carrying his team from the bubble to the aforementioned ninth seed. He is the type of talent that could win a game or two by himself. 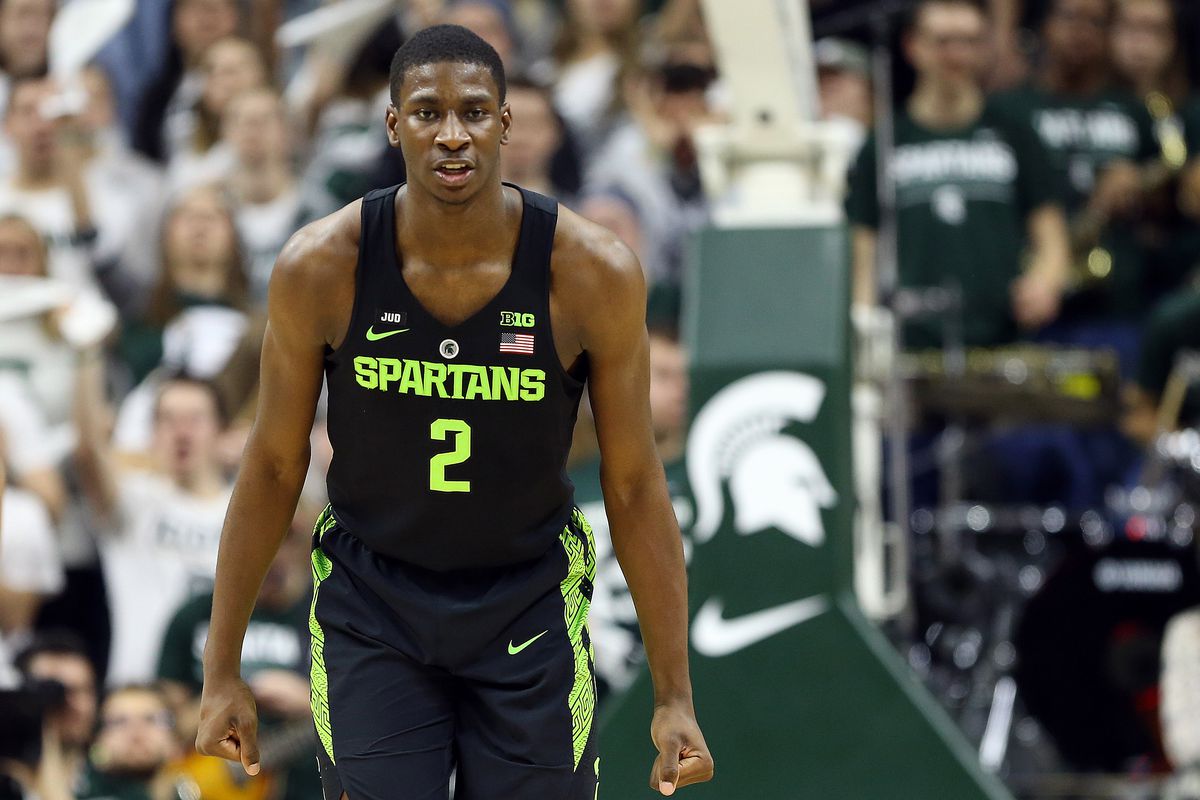 In this region, the #2 and #3 seeds (Duke and Michigan State) are more talented than the #1 seed (Kansas).  Will that talent matter in the grander scheme? It should. I haven’t “loved” Kansas all season but the Jayhawks have one roster stabilizer in Big 12 Player of the Year Devonte’ Graham.  The guard averaged 17.3 points and 7.5 assist on a below-standard Kansas team and pushed them to the #1 seed. That says something. It also says something that as talented Duke and Michigan State are, that they are seeded below the Jayhawks.  If we’re looking at the totality of it all, its blasphemy, especially in the case of Michigan State. The Spartans are my pick to come out of this region despite how I personally feel about coach Tom Izzo and the program after the ESPN expose’ about former (and now incarcerated) team doctor Larry Nassar and sexual abuse towards the US female gymnasts and former Spartan female athletes . On the court however, the Spartans are loaded. Future lottery picks Miles Bridges and Jaren Jackson Jr lead a team that was indeed nation’s hottest team in a stretch from January into March when they won 14 in a row, and have five players averaging in double-figure scoring.  Duke could easily win this region as they are even more talented than the Spartans. Marvin Bagley Jr averages 22.5 points and 11.5 rebounds and is virtually impossible to defend when he has the ball in the paint and fan-favorite *snicker* Grayson Allen should bring senior leadership along with deadly shooting to make the Blue Devils a hard out.

For the first two months of the season, Trae Young of Oklahoma was THE story. For all of the supreme statistical numbers he averaged for the season (First player to lead the nation in scoring and assists with 27.4 points and 8.8 assists per game), the Sooners ended the season losing 12 of its last 15 games.  Many wondered if Oklahoma even deserved a bid but at this point it doesn’t matter. Trae Young will bring viewers, period. For how long is the big question? 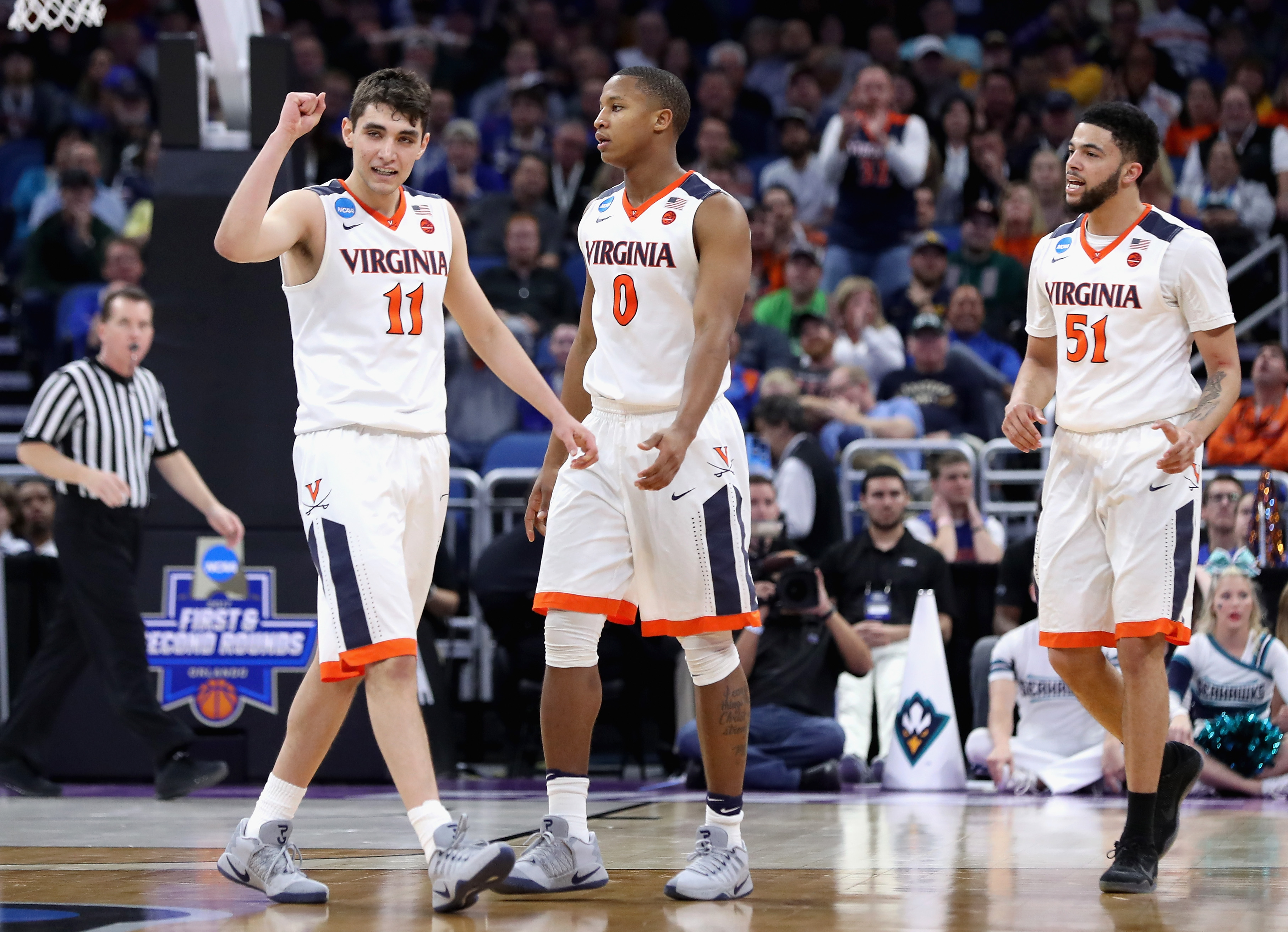 The South region features the #1 overall seed in the Virginia Cavaliers.  Will this be the year coach Tony Bennett can take the Cavaliers to the promised land? The road to the Final Four has gotten a little more difficult for the Cavs after losing sixth-man extraordinaire De’Andre Hunter but this team is one of the greatest defensive teams I have ever seen.  Every time I’ve sat and waited for the other shoe to drop, it didn’t. That is a testament of the kids of the program and its overall team philosophy. It’s hard to believe that the Cavaliers will do anything other than continue to ride the wave that led them to the ACC Championship crown, yet there is one team – scratch that, one player – that can change everything.

That kid is DeAndre Ayton from Arizona.

Every season, we see players that somehow, someway raise their individual games to a level that no matter what their opponent throws at them defensively, it just doesn’t matter.  Think Steph Curry, Kemba Walker, Karl-Anthony Towns in recent tournament history. Ayton is that guy for 2018. This kid is a fucking amazing talent. Scoring 20.3 points per game while grabbing 11.5 boards, he’s an absolute mammoth in the paint, and has overwhelmed teams that don’t have a big body that can even somewhat neutralize him while simultaneously wondering why he isn’t averaging MORE.  He’s gotten better and better each game. His skill set is exactly what you would want from a new-age big man – think a better Joel Embiid during his one season at Kansas. Arizona can ride the Ayton wave all the way to the Final Four

I am an unabashed Kentucky fan and I am really pissed off at the fact that my Wildcats will most likely face Arizona in round 2.  This isn’t a second round match, this is an Elite 8 level matchup that we will see on Saturday. It’s totally unfair! (LOL)

This region can proudly boast that it features both teams from last season’s title game (North Carolina and Gonzaga), an Elite Eight team (Xavier) and a Sweet 16 team (Michigan).

I can admit this publically, I have a soft spot for Xavier, who earned the first #1 seed in school history.  Coach Chris Mack has done a masterful job with the program, winning its first Big East regular season title. The Musketeers are always tournament ready, seeming making a run to the Sweet Sixteen every year and this year expectations are heightened.  Senior wing Trevon Bluiett is back for another run after last season’s breakout tournament performance after scoring 20+ points in three straight games before being slowed in the regional final and backcourt mate J.P. Macura is 6’6 and averages 12.2 points, making them a matchup problem for most teams. If this team didn’t show a propensity to being swarmed by long, rangy defenders, I would make them my choice to win the whole shebang. The North Carolina Tar Heels are the defending national champions and the No. 2 seed and Michigan earned the No. 3 seed after winning the Big Ten Tournament, and enter March Madness on a nine-game winning streak and as the trendy pick to make serious noise. Don’t be surprised if the sixth-seeded Houston Cougars end up in the Final Four. The Cougars are built to win with an experienced team led by seniors Rob Gray (18.6 points, 4.6 assists) and Devin Davis (10.7 points, 6.2 rebounds) and junior Corey Davis Jr. (13.5 points, 43.7% from distance).

All in all, there are at-least ten teams that can honestly say they have a shot to win six straight ballgames.  Determining which school that will do just that, is all the fun.