First things first, I would like to apologize for the lack of a review for last week’s episode. We had a plan for it, but the plan didn’t come to fruition, therefore there was no review. BUT…I will say this about last week’s episode…It was definitely one of the best episodes in the whole series. We had Arya returning Winterfell, Jon still refusing to bend the knee, Bran being Bran and carrying the shit out of Meera…And we finally got to see Drogon in action as Daenerys nearly kills Jaime and Bronn while she was taking out the rest of their army and supplies. So overall, it was a pretty eventful episode. Tonight’s episode lacks the action of last week’s episode, but it moves the story and drops a couple clues that seems to confirm something we did know and something we might not have known. 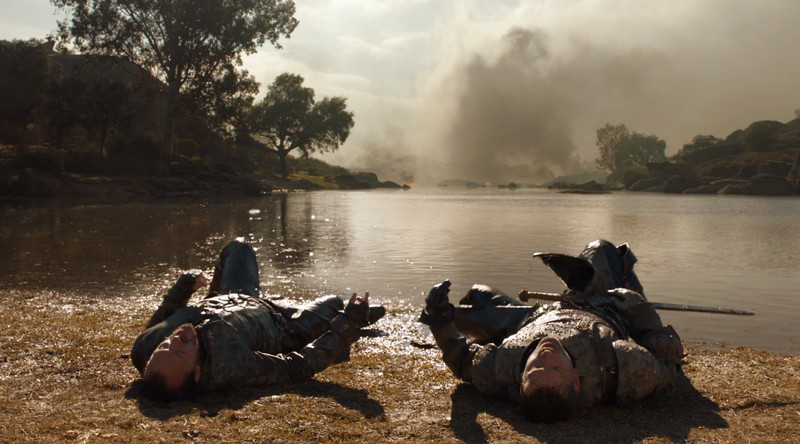 This week’s episode started with Bronn pulling Jaime out of the water, they somehow survived the battle. Jaime looks to have shit himself and finally realizes that this is a war they cannot win, Daenerys has 3 dragons and they only saw 1 of the three. Bronn agrees, and says when those dragons hit Kings Landing, he won’t be there. He ain’t messing with those Dragons at ALL and that’s where he draws the line. Jaime wants to tell Cersei that it’s over, there is no way to win, Bronn basically tells him, “Well, you might as well jump back in the lake”. Bronn has spoken. 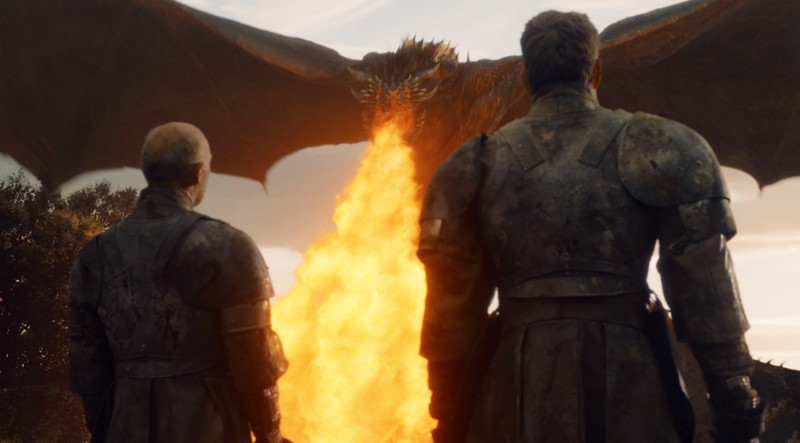 Meanwhile, Daenerys holds court over the remaining Lannister army soldiers who survived and give them an option, join her or die. After some encouragement my Drogon, most bend the knee and agree to fight for her. While a few decide to stand their ground and stay loyal to Cersei. Most notably, Randyll Tarly and his son Dickon. Daenerys reads Randyll a little bit and calls him out on his changes of allegiance of the past and asks if he is sure that he wants to do this. Randyll says that she is not his queen and he won’t listen to her, welp…..Dracarys!!!!!!!….Now Sam is the final member of house Tarly alive. Tyrion tried to sway the Dragon Queen, but she said that she made a threat and must follow through, going back shows weakness. And I wholeheartedly agree. Jaime gets back to King’s Landing and informs Cersei that there is no way that they can win the war. Cersei mentions that they can hire more mercenary soldiers, Jaime says the Dothraki soldiers are just better and literally would use them as sport. Jaime insists on a truce between them and Daenerys, but Cersei is like fuck that, she is going kill us whether there is a truce or not. S we gonna go out fighting and if we die we die. More on them a little later. Our favorite weirdo Bran is back to Bran’n. But this time, he actually does something of worth. He wargs into his ravens and flies out beyond the wall to see where the Wight’s are….and HOLY SHIT are they CLOSE. As Bran is flying, the Night King sees him and Bran back’s out of the ravens and they scatter. Remember, Bran loafed one time and the Night King saw him and touched him which now gives him the ability to know when Bran is warging to something near him and essentially he can physically tell where Bran is. Bran is scared and says it’s time to send ravens out to warn others of the impending danger. Back in Dragonstone, Jon Snow is waiting for Daenerys to get back and we got to see something we didn’t expect. Definitely something that the Dragon Queen surely didn’t expect. As Drogon lands with Daenerys mounted, he walks towards a visibly frightened Jon Snow. Jon actually reaches out, and Drogon lets him pet him. The camera pans to Drogon’s eyes and his eyes did something. The dragon knows. Daenerys jumps off and Drogon flies away. 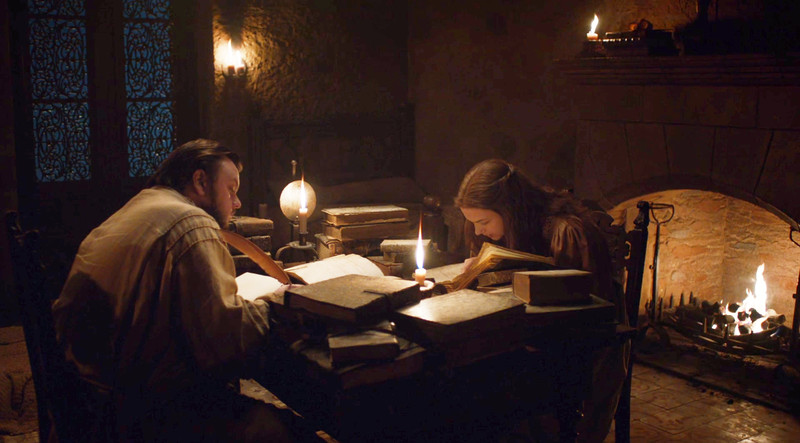 Back at the Citadel our good buddy Sam is still training to be a Maester when he comes across the meeting which is discussing the note that was sent warning the Maester’s of the impending doom. Of course they are skeptical, so Sam tells them that he has met Bran and that he is telling the truth. He even goes as far as to tell them that he has actually seen them. But in typical fashion they blow him off and believe the note is a ploy by Daenerys to get them to bring their army up north so she can take the Citadel. By now Sam is pissed. And while he is at home he makes a decision to leave the Citadel. The most important words in this scene were spoken by Gillie. While reading one of the Maesters scrolls, she reads that “Prince Rha-gar had a secret annulment and a secret wedding”. More on this later on. Anyways, Sam decided to hit the Citadel library, take some books and leave. Leave to go where? I am not sure, but I’m thinking he’s going to Winterfell. “I’m tired of reading about men greater than me”. 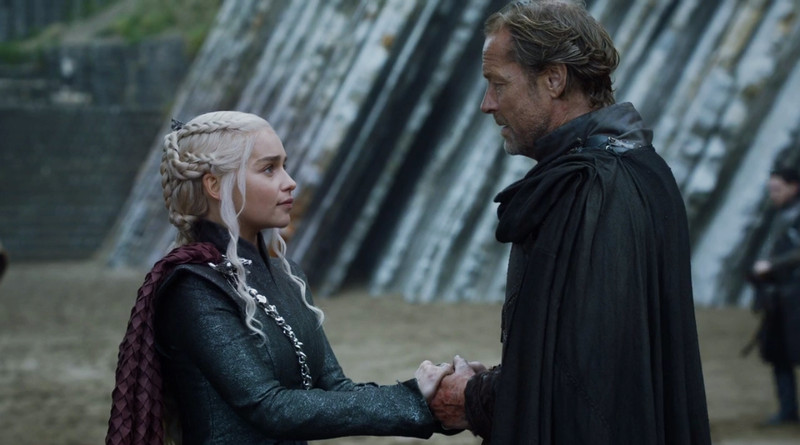 Oh By the way, Jorah made it back to Dragonstone…Hooray!!!! Anyways….

Brans letter arrived in Dragonstone and was delivered to Varys and Tyrion. They were together talking about how they can try and control Dany, because they didn’t like her burning the Tarly’s. But fact remains that they are loyal to her. But Bran’s message made Tyrion think of a plan. They are now believing in the threat, Tyrion believes that if Cersei and Daenerys work together, they will have a better chance against the Wight Walkers. But how is the question? How is he going to broker a truce? 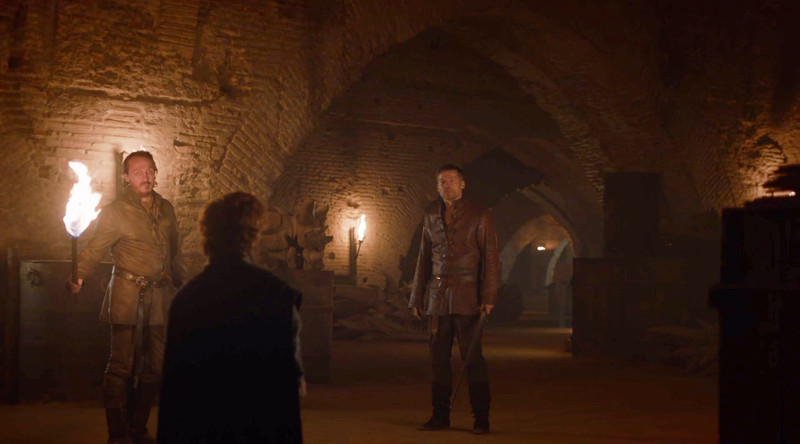 Enter Ser Davos who offers to sneak Tyrion into Kings Landing so that Tyrion can meet with…….Jaime. Davos being THAT dude, gets Tyrion in and Bronn gets Jamie into the caverns to meet with Tyrion. Jaime, of course, wants to Kill Tyrion but he could do much with a sparring sword. Tyrion explains that he didn’t kill Joffrey and that Tywin was going to put him to death for something he didn’t do. Jaime didn’t want to hear it, because he already knows plus he is torn in so many ways. But he hears him out. In the meantime, Ser Davos goes and finds an old face…GENDRY! And boy he didn’t waste any time when Davos said it was time to roll. He grabbed his bad ass hammer and they were out, but not before Gendry showed us how well that he wields the hammer by taking out 2 guards on the shore. 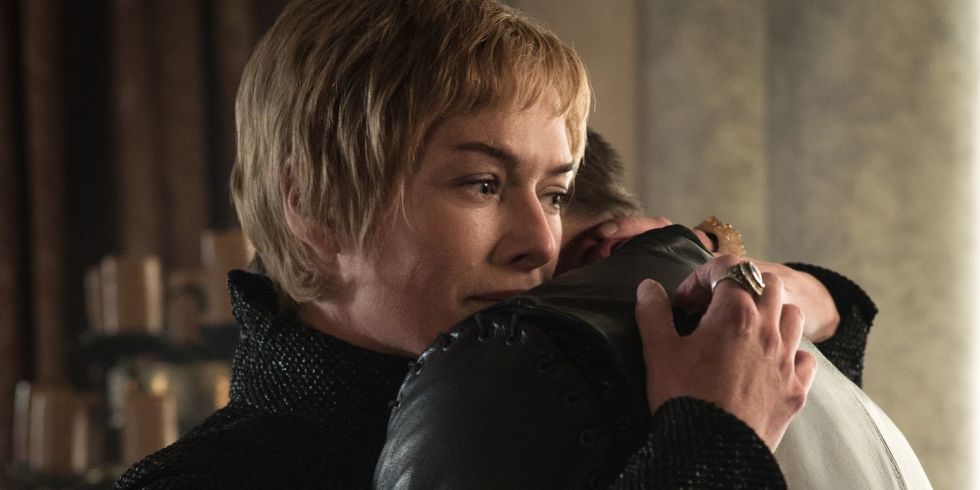 Jaime relays the message back Cersei, in the midst of this conversation, he reveals to her that it was Olenna that poisoned Joffrey and not Tyrion. She didn’t believe at first, but he convinced her. She seems OK with the plan and OK with meeting Daenerys, but she is plotting. Still plotting to find a way to win. She also let Jaime know that she knew about the meeting with Tyrion, I mean she IS the queen and all, so she see’s everything. And tells Jaime that Bronn should die for setting up that meeting without informing Jaime before. She also claims to be pregnant…By Jaime. Now, I think she is lying. But this is just me. I think this is her way of trying to control Jaime because he is at his breaking point.

Arya and Sansa…..Ayra…And…Sansa. It’s clear that Arya doesn’t really like this version of Sansa. Hell, she was never really fond of her from the start of the series. But they are sisters, and she does care. What she didn’t like was how she allowed folks to bad mouth Jon. Arya and Jon are close because they are so much alike. But Arya doesn’t want this “Lady of Winterfell” stuff to go to her head, because Arya doesn’t want to have to kill her own sister. Speaking of Arya, she’s been very suspicious Littlefinger, so much so that she followed him around to gain intel. After spying, she finds a scroll. The same scroll Sansa wrote in Season 1 to Rob urging him to come to kings landing and swear loyalty to Joffrey after Ned was found guilty of Treason. Basically a letter to urge Rob to come down and die. She finished reading it and puts it back and leaves the room. And who is in the shadows watching…Littlefinger. The best “Game” player on the show.

Now that Tyrion has gotten the ear of Cersei, proof is needed. So they decide that they need to grab a Wight and bring it back to Cersei so she’ll believe them. I think this is the worst idea ever, but cook on. So Jon, Gendry and Jorah head towards Eastwatch and meet up with Tormund, Beric, The Hound and Thoros. And all these guys who all hate each other for one reason or another are now united together for a common cause. Why? Because Jon the Snowman said so. He brings people together and he gets shit DONE. How will this turn out? I have no clue, but I’m sure it will be a crazy battle between the Magnificent 7 and the Night Kings minions.

Lastly, the major thing we found out in this episode is that Jon Snow, in fact, IS NOT A BASTARD. Gillie read about Rhaegar and Llyana but she doesn’t know that, in fact, she was reading about Jon’s parents. Drogon knows that Jon is indeed a Targaryen and now we know he is too. The question is, when will he find out and how will Daenerys react to this news…We shall see!